While I may not have done as much exploring over the Christmas break as I would have liked, I still managed to have a little afternoon trip within Greater London. Last week I hopped on a train at Liverpool Street Station with Chingford as my stop. Destination: Epping Forest, and more specifically, Queen Elizabeth’s Hunting Lodge.

The walk from the station was a lot shorter than I thought it would be, and pretty quickly you get the feeling of being ‘out in the country’ 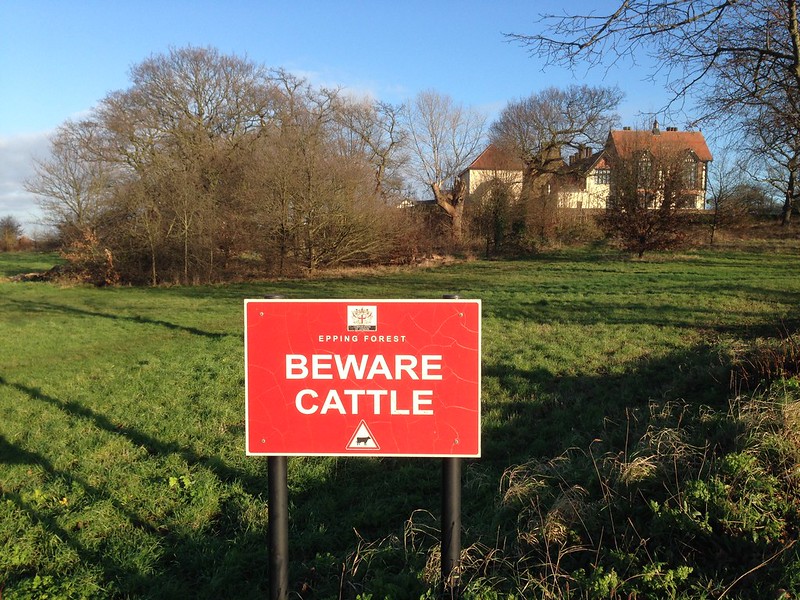 The Forest (with a capital F) and the lodge, and indeed the whole lot are run by the City of London Corporation. I may not be in the City, but do I ever really leave it? There’s City crests a plenty. Here’s the entrance to The View visitor centre. 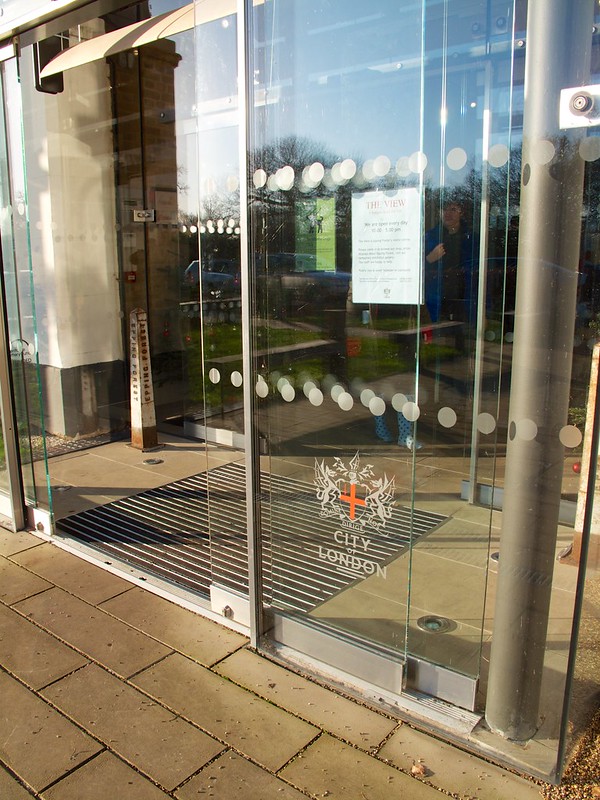 And immediately next door is the building I’m here for, complete with 16th century guy waiting for the rest of his family outside. On hunting days, the lodge would have been covered with banners such as these. 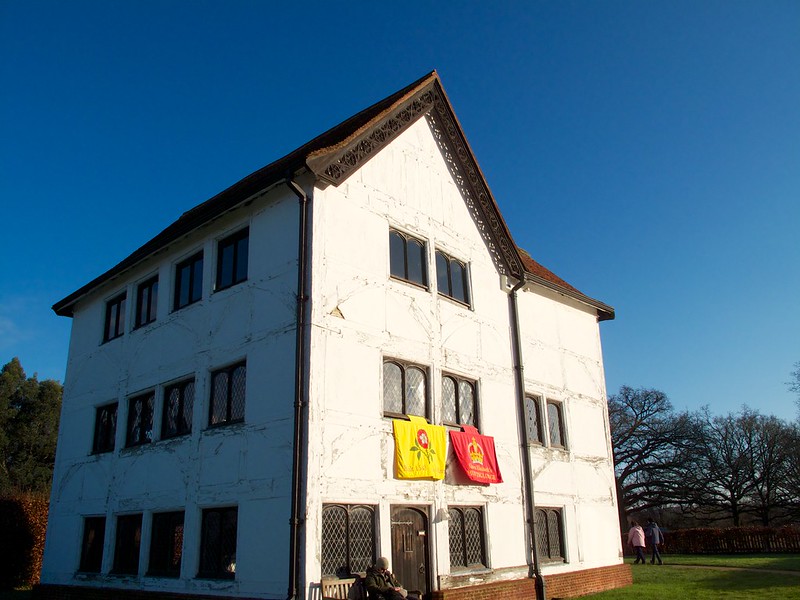 Calling it Queen Elizabeth’s Hunting Lodge is a bit erroneous though. The name didn’t crop up until the Victorians. It was at this time that a story surfaced of Elizabeth coming here to celebrate the victory over the Spanish Armada by riding her horse up the inside staircase. There’s no actual evidence that ever happened, or anything really substantial to say she was indeed ever here. There’s a chance she was. One of her favourites, the Earl of Leicester, owned nearby Wanstead Park so it’s possible she was in the area and maybe stopped by for a visit.

The timber-framed lodge was built for King Henry VIII in 1543 and originally called The Great Standynge (Standing) as it was the first one in England to have three floors. By this time the King was, how shall we say, far past his hunting prime but still wanted to shoot at some animals. When the lodge was first built the upper floors were completely open. Henry and his party would perch up at the top, and animals would be rounded up and fire off some rounds, a bit like a shooting gallery game.

Inside, the ground floor is a large kitchen which would have prepared all the food required for a hunting feast. The hearth remains and contains quite a bit of original brickwork. 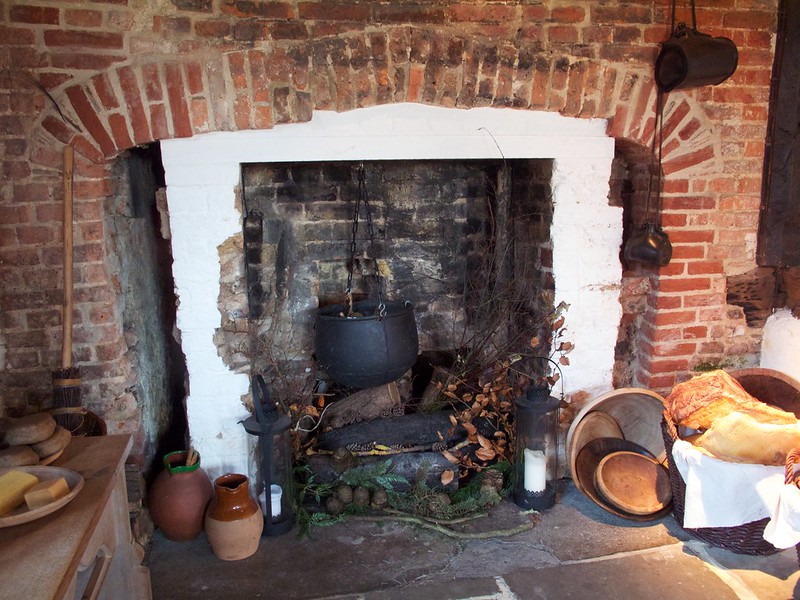 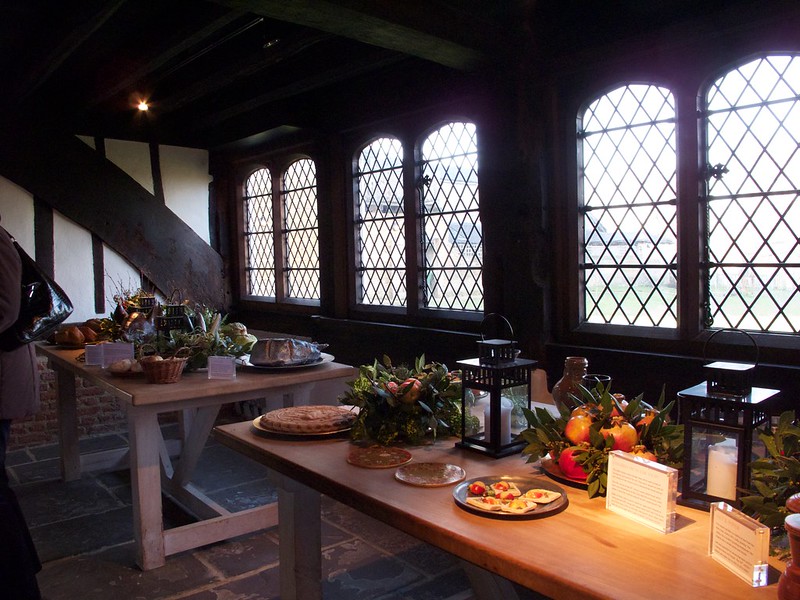 The large central beam in the kitchen has some interesting markings on it. These would have been made by rush lights places in front of it to provide lights for the kitchen workers. The flames would have burnt the grooves into the wood. 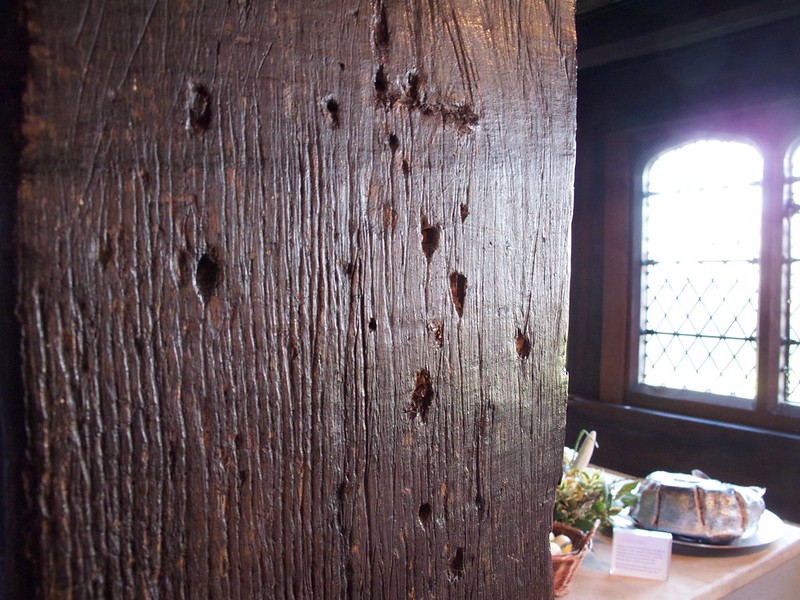 Before you head up the stairs, there’s a odd shaped bit of timber. In the bit that is cut out, there would have originally been an oven for baking bread. 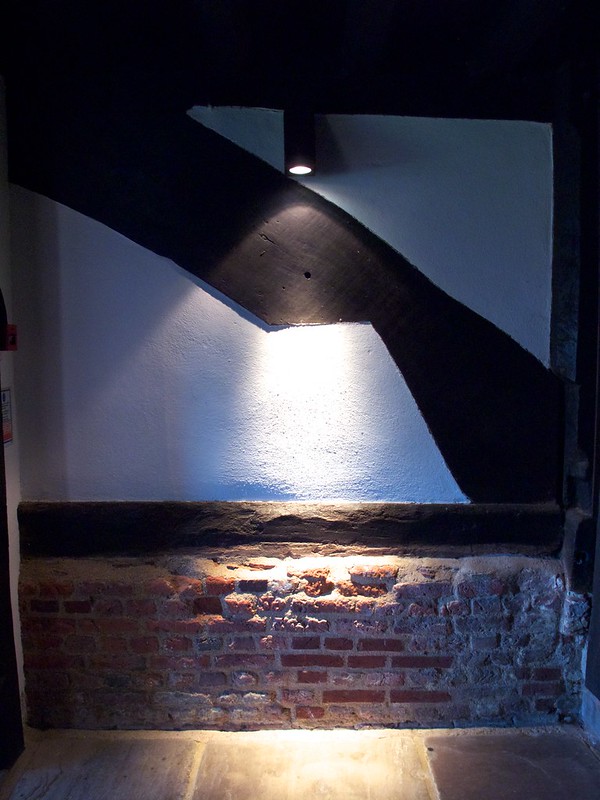 Heading up the stairs that Henry VIII may or may not have been able to manage, and a warning about taking care on the stairs. 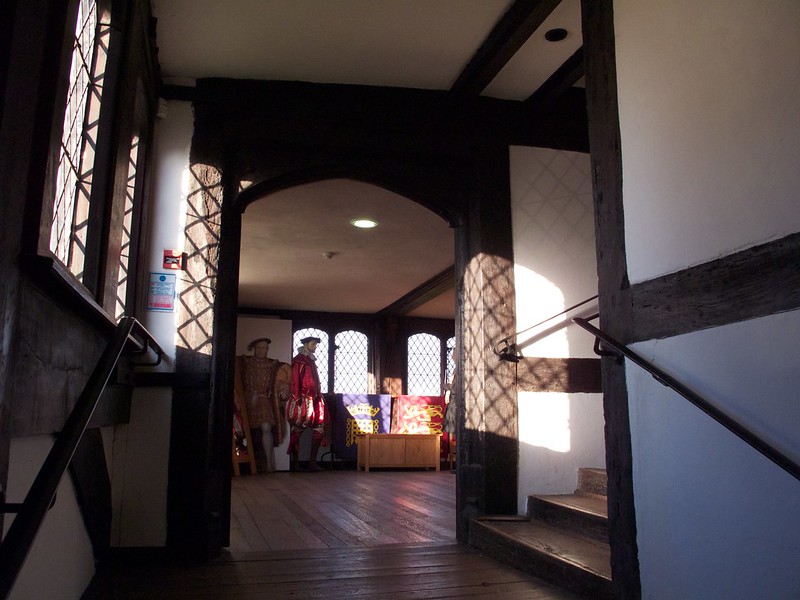 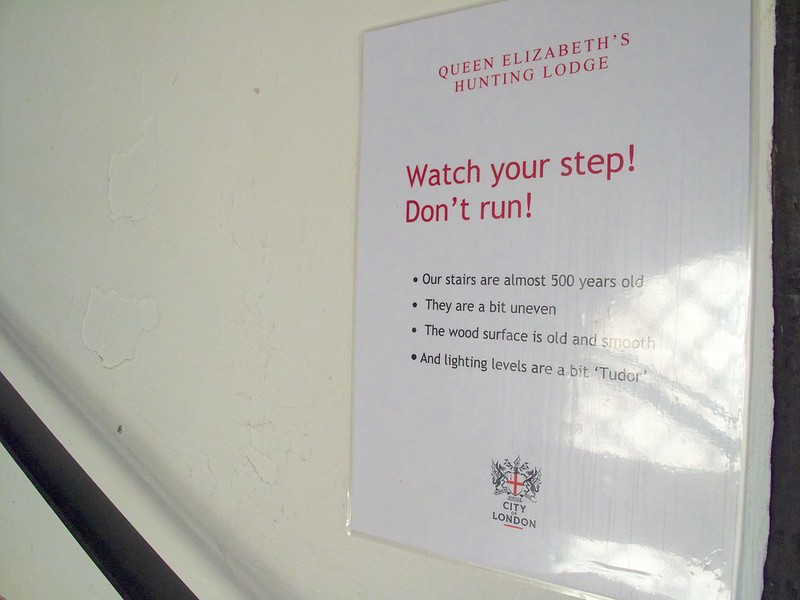 Lots of timber frame, roughly 90% of which is original. Not too shabby. The lodge would have been flat packed – the timbers were all pre-made and assembled on site. In the main entrance, there are some carpenter marks (that I didn’t get a photo of as it was too dark) that helped them put it all together. How very modern. 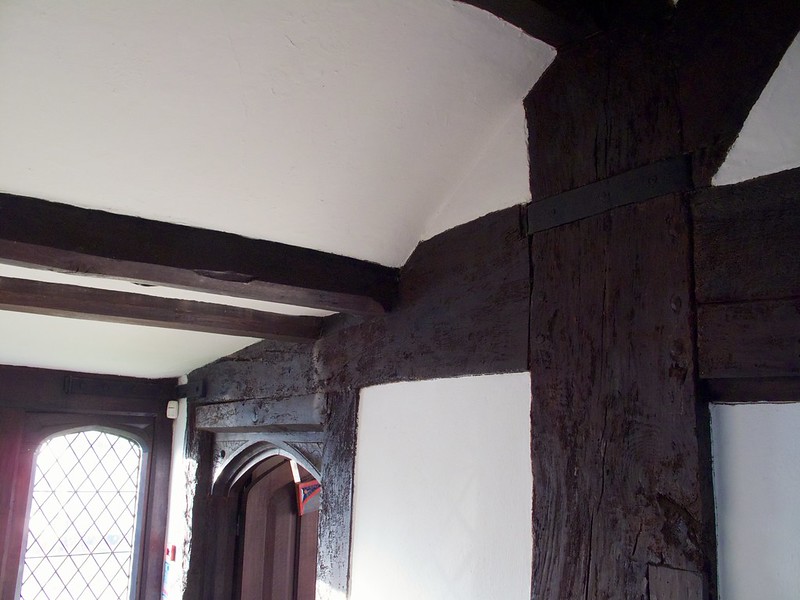 The top floor where all the hunting was done from, with a rather nice timber frame roof. The curved pieces in the middle were made to resemble antlers. 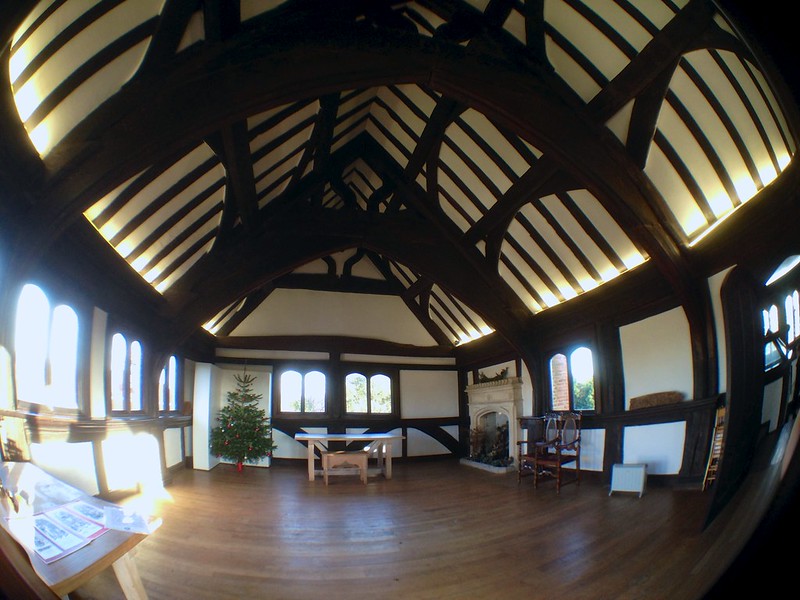 The floor below had a few of these markings called apotropaic marks. You can just about make this one out, it looks a bit like a flower in a circle. These were put near windows and chimneys to ward off evil spirits from entering. 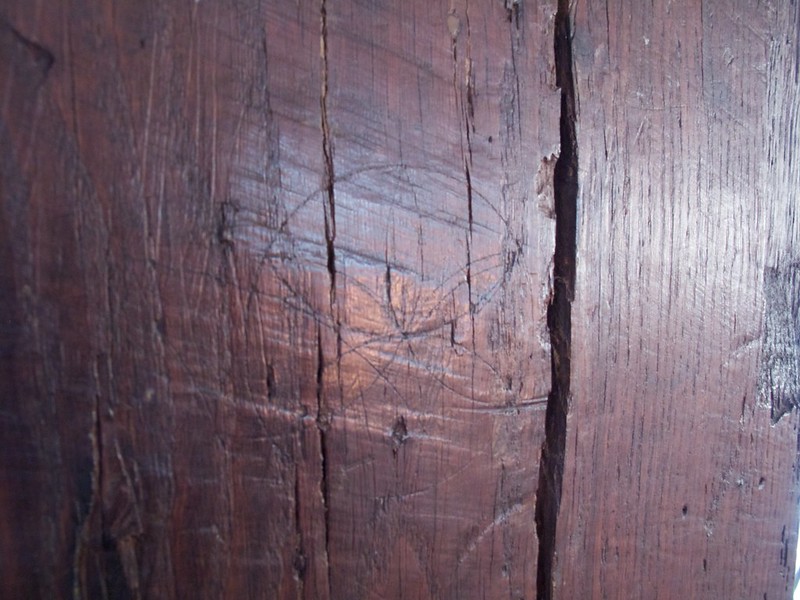 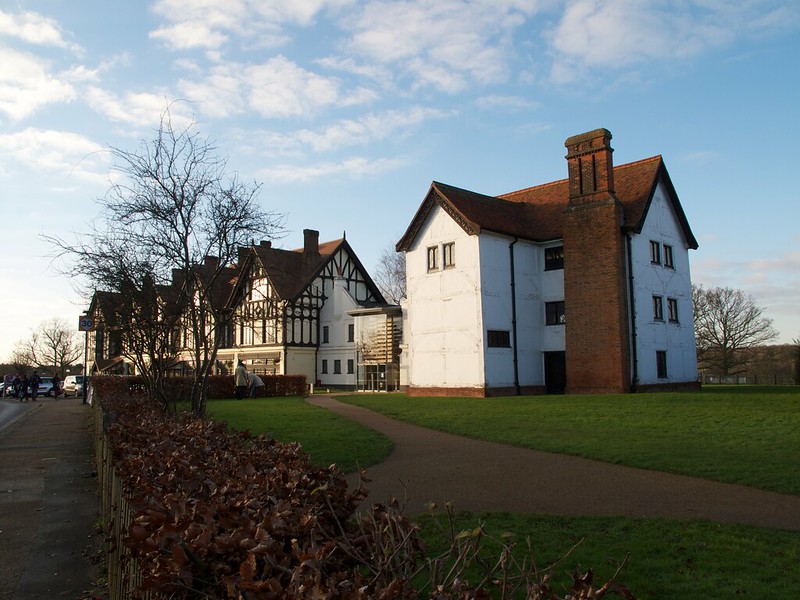 For some more photos, head on over to Flickr.

3 thoughts on “That Tudor Hunting Lodge in Epping Forest”